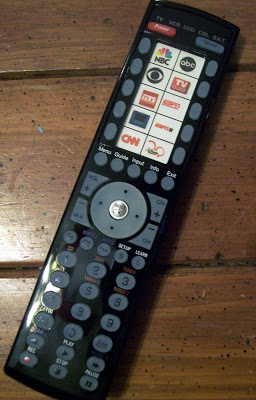 So, really, Greg owes you all a confession that he is weak too. He was all excited about some Christmas present that he ordered me. “It will simplify your life,” he boasted.

This mysterious present came in the mail earlier this week. He told me he wanted to go ahead and give it to me, but we had friends over for dinner + Settlers, so I told him that he should wait. I didn’t want the glory of the gift to be overshadowed by everything else going on in our kitchen at that moment. So he waited … but not all that long. Like an hour.

“It will simplify your life,” he reminded me.

He gave me a remote control. But, I suppose it’s not just any remote. Rather, it’s a universal remote.

Among my first reactions: “Do you think I sit around all day and watch TV?”

He assured me he knew I did plenty of things (like parenting our 19-month-old daughter …) during the day. But he tried to tell me that I used the TV more than him. I still am not so sure about that.

After all, at the top of Greg’s agenda Saturday was programming the new universal remote. My universal remote. He has it working so it controls our television, stereo, DVD player/Media Center Extender and cable box. All he has to do is program our favorite stations. Well, rather my favorite stations. He did give me the remote for my Christmas present. (He has since told me that he got me two other things I didn’t ask for … I’m trying to refrain from being worried, but I can’t help from wondering how much he’ll benefit from my other mystery gifts!)

The remote came with two sheets of television channel logo stickers so I can choose my 10 favorite stations. I already chose my 10. Greg should just be glad ESPN + ESPN2 made the cut. I had one spot left, so I picked the Disney Channel for Cate. She doesn’t watch much TV, but I figured one day she might like this channel. I can always change the sticker. And I wasn’t giving Greg the satisfaction of ESPN Classic because I think that station is silly. I really do flip to ESPN + ESPN2 sometimes, as long as they aren’t showing hockey or a dog show.

So my life is simplified. We have one remote, instead of four. Or maybe I should really say: I have one remote. “Hey, it’s my remote.” You know, I think this gift will work out nicely when he thinks watching a rerun of a poker tournament of which he already knows the outcome is better than watching “Trading Spaces.”