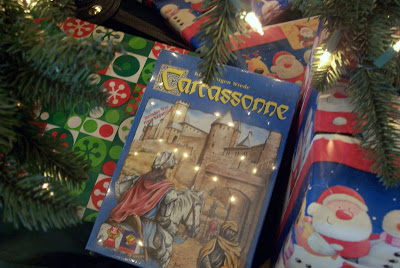 I have a confession: I often find excuses to give Greg (and now Cate, apparently …) presents early. He’s not much better. I ordered him Carcassone because we’re always looking for fun two-player games. Well, it came in the mail Saturday + we were discussing playing a game. I tried not to give in and open the box, but then he guessed what it was! So I let him open it. Although, we ended up playing the two-player Settlers of Catan Card Game instead. I put Carcassone under the tree, like that makes up for my weakness.

Like I said, apparently I’m going to have to toughen up before Cate is old enough to get the giving + receiving of Christmas presents … 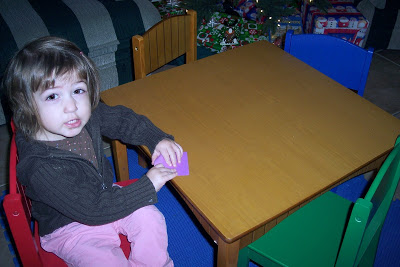 Mom ordered this table + chairs for Cate. It was delivered one day last week + Greg ended up putting it together last night. I suggested we go ahead and put it out because she’ll be overwhelmed on Christmas anyway, so this way she can enjoy it without distraction. (Good justification, huh?!) 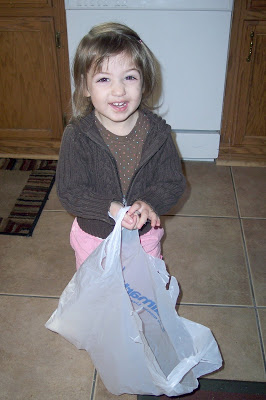 Cate likes to help carry stuff in from the car after a shopping trip. Apparently she even likes toting around an empty sack once we’re inside! The sack did contain some stocking stuffers for Greg, but I had to put those away so I didn’t away all the surprises!