We had fun at the Murray State football game. Actually, it was a fun morning leading up to game time. First, Peggy + I went to some holiday bazaars + yard sales. And we had some great finds. Then we came back to our house, where later Gary, Angela, Charles, Elijah + Ethne joined us for lunch. I made Tortellini-Corn Chowder + Peggy made Texas cornbread.

It was a beautiful fall day, although temperatures were definitely cooler than they had been. We had to break out layers + blankets for the second half of the game. 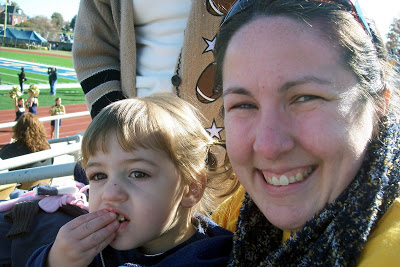 (I’m wearing my new scarf that Peggy bought me at one of the bazaars. Hand-made scarfs + homemade fudge are the best things about bazaars. Oh, and the homemade cinnamon rolls I’m eating for breakfast tomorrow …) 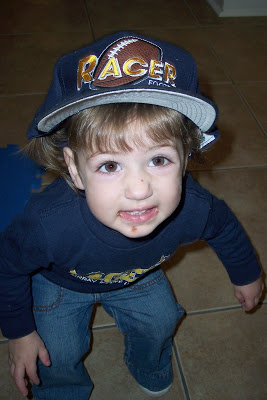 That’s Cate cheesing while wearing Granddaddy’s hat. My girl loves her Granddaddy + had a great time cheering with him at the game … 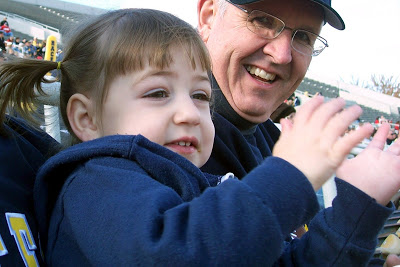 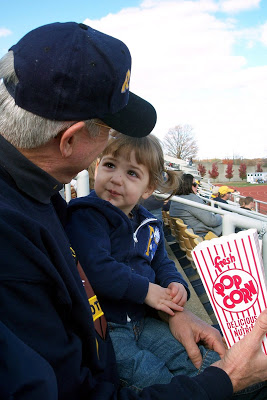 They share a love for popcorn too. Among the nice things about going to MSU football games: Free popcorn for all the kids that sign up to be Junior Racers. (That just means filling out some info and checking in at the table each game. They the girl there gives Cate a coupon for free popcorn. Thankfully, they do it at basketball games too. Hey, sports fans: College basketball season is here!)

Then there was some encroachment … 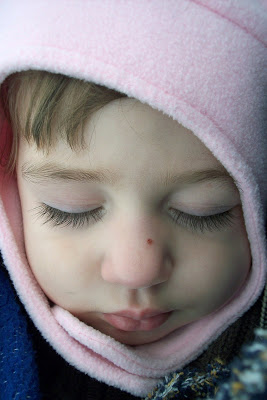 … on nap time that is! (Get it, football fans: Encroachment?!) It had been a long time since Cate feel asleep with me holding her. Many months, actually. But, while nap time on Mama at a football game in temperatures that required Cate to wear this adorable hat + me to sport my new scarf isn’t ideal … It was sweet to hold my toddler like she was a baby again.