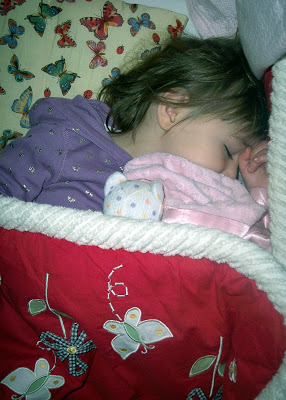 I’m thankful Cate is a good sleeper. I’m reminding myself of this today because we’re in nap transition, I think.

She has been taking two naps (minus a few weeks not long before she turned 1 when she thought one nap was enough …), but now some days she leans toward just one. The last couple of months I’ve had to limit her morning nap to an hour or she thinks she doesn’t need an afternoon nap, which doesn’t work well about dinner time when she thinks she’s ready for bed! So it’s an hour in the morning and usually close to two hours in the afternoon. If we’re busy in the morning, she forgets she wants a nap.

Here’s where we are: One day this week she didn’t take a morning nap and ended up taking a 3-hour afternoon nap. That made me think helping her phase out her morning nap was the way to go. So the next day I tried to help her along, and she ended up taking only sleeping a little more than an hour. I figured I needed to give it a few days, so I was going to ignore the morning nap again today, but on the way home from our daily walk with Jaclyn, Luke + Norah, she said “Night Night” in her car seat and laid her head back. I needed to shower, so I laid her in the crib when we got home.

She didn’t move. Or make a sound.

She slept in this position (shown above) for 45 minutes, until I had to wake up her for an appointment I had. Then we ran some errands before I took her to a friend’s house to play while I went to a business lunch with Greg. I picked her up at 1 p.m. and not long after she was looking for her pink blanket (a clear sign she’s ready …). Now I hear her sleeping breathing over the baby monitor.

I think it’s a day-to-day thing. She has her indicators that she needs sleep, so I think I should just pay attention to those + be thankful she’s a go-with-flow girl who can make adjustments depending on our day. Still, most you know I’m all about a routine. I have the feeling the morning nap is going to be gone sooner than later, but we’ll just have to see how the next few days go.

A few things about the picture: Look how close she’s sleeping to the bumper. That’s typical. She’s such a snuggler with it! And that’s her pink blanket the she always sleeps with, although I have a back-up blanket that is similar in case that one is in the wash or something. Lately she’s also been wanting to take a stuffed animal to bed with her. That polka-dot bear is often the chosen one. Oh, and the pillow. One day she took that with her into bed. Then the next day when I was putting her down she was adamantly saying “Night Night” and pointing toward the rocking chair. At first, I couldn’t figure out what she wanted because we had already rocked. Eventually, I realized she was pointing to the pillow. She wanted to the pillow in her bed too.

My philosophy on naps boils down to being flexible as long as she sleeps at night. And since she’s been sleeping 12 hours at night for quite some time, I’ll just be thankful she’s a good sleeper + take what I can get during naptime.