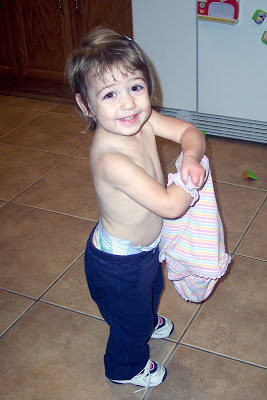 I know, seriously. Time has flown. 18 months. Really. You may think this picture is random, but it really captures Cate at this age. No, she doesn’t like to be nude, generally, but she is very into figuring things out. The day I took this picture, Cate realized she could take her shirt off on her on. Recently, she’s also figured out how to climb onto the couch all by herself. I love seeing her put things together, literally + figuratively.

She also likes to have a spoon at every meal, even if she’s eating finger food or something that would be better eaten with a fork. Sometimes she just holds the spoon + then eats with her fingers. She likes to have her shoes on, often bringing them to me + saying “sock, shoes.” And she likes to wear necklaces (or her stuffed monkey with Velcro on its hands …).

Oh, and she seems to be cutting her two-year-old molars. Other than those, she’s just missing one tooth in front of one of the other molars.

And, lastly, you mothers out there might appreciate this: She’s been saying “poop” to me when she has a dirty diaper. Every now and then she says “poop” when she just has a wet diaper, but she’s generally right.