Cate + I took a road trip to visit Grandmom last Tuesday. I guess I never got around to blogging about it … probably because there’s a story about my pictures. First, I forgot my camera. I know, weird, huh? I hardly leave the room without my camera, and I was well on my way to Louisville before I realized I forgot it. Truthfully, I realized when Cate was doing something funny (hiding her entire self under her security blanket) when I realized I couldn’t take a picture. Anyway, I just used Mom’s camera when we were at the Louisville Zoo.

I had taken Cate to the St. Louis Zoo, but we hadn’t been to the Louisville Zoo yet. It had been YEARS since I’d been there, so it was fun for me too.

So, anyway, later that evening, I took Mom’s camera card to Rite-Aid so I could take a CD of pictures from our fun day back to Murray with me the next day. All went well, and I even printed a few.

I got back home and later decided to transfer the pictures from the CD to my computer so I could upload them to my blog + Facebook. When I browsed through the pictures I realized I didn’t recognize anyone + they were from a construction site, not the zoo.

Apparently Rite-Aid gave me the wrong CD. Mom ended up getting me the right CD back and I got it in the mail yesterday. (Poor other family doesn’t have their pictures, but I guess that’s not my problem to solve.)

So, all of that to say … Here is Cate at the Louisville Zoo last Tuesday: 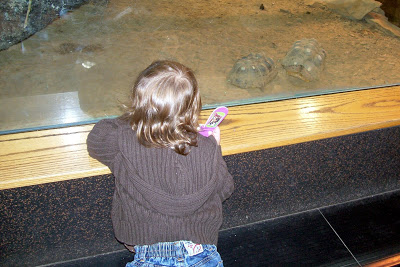 I guess she was thinking about calling the turtles. Funny story about that plastic phone: When we walked into Mom’s house before going to zoo Tuesday, Cate went straight for the toy box. She pulled some toys out, but the first one she paid any attention to was that phone (which, for the sake of details, had a picture of Hannah Montana on it …). It’s funny to me that she finds a toy phone (or something somewhat similar to a toy phone … like a remote or anything else with buttons) regardless of where we are. 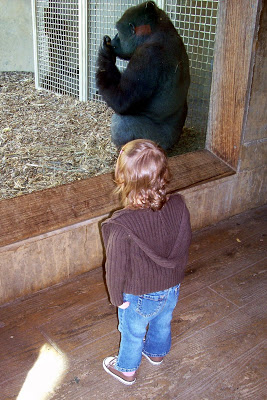 Cate was into the monkeys (including gorillas …) .

But not so much the statue animals … 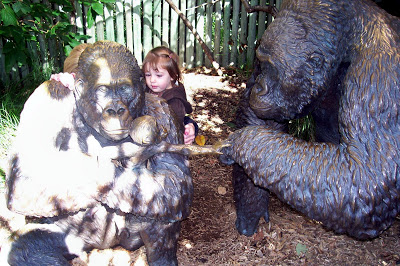 Yes, that’s Grandmom hiding behind the one on the left. She’s trying to woo Cate so I can take a picture. It only sort of worked!

Earlier we tried the statue elephant … 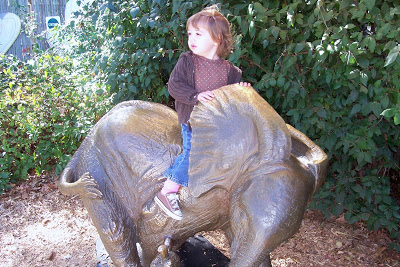 She’s looking to Grandmom and non-verbally saying, “Can’t you help me off of this thing?” Then she said to me, “Come on, Mom, seriously, I’m not wanting to be up here.” That’s her hand motion (below) for “Pick me up.” 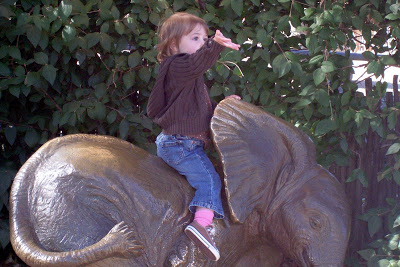 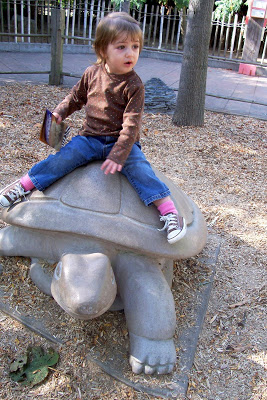 We went to the petting zoo, which I didn’t realize was even part of the zoo. The rules included: Do not touch the animals’ heads or horns. Cate was tempted by the horns, but we managed to keep her from touching them. 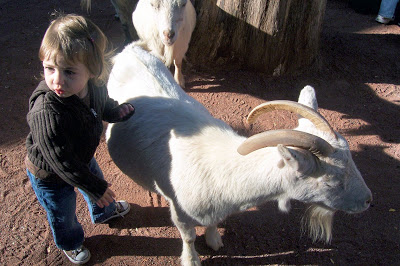 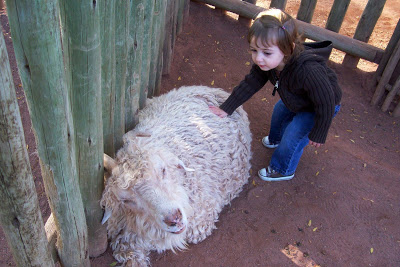 Funny story: The day before the zoo, Greg + I were going through animals Cate might see, and then she would make the appropriate noise. Greg said, “Sheep.” And Cate said “Baaa.” Then I said, “I don’t think so. What kind of zoos have sheep?” Well, Greg was right, Cate saw a sheep at the zoo’s petting zoo. 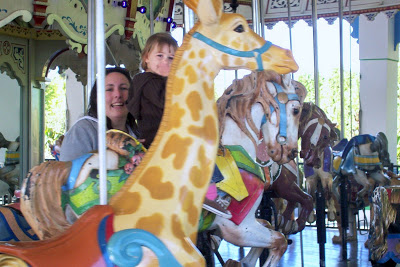 That’s Cate waving to Grandmom. In addition to many waves, there were many “nays” because she was riding a horse. 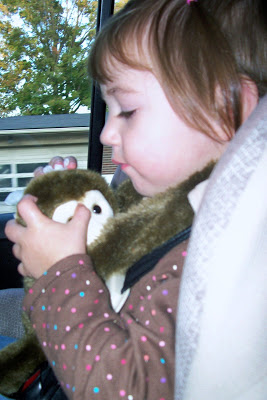 Like I said, Cate enjoyed the monkeys, so Grandmom bought her a monkey. Conveniently, its hands can be velcroed around her neck, like a necklace. She likes that.