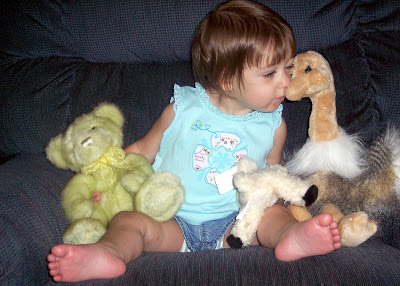 This is actually the brainstorm for a scrapbooking page, but I thought I’d document here while it was on my mind. Yes, these are the things on my mind!

Like most kids, Cate likes stuffed animals. She especially likes to hug them and say “ahhh” while doing so. I think we’ve said “ahhh” once or twice when she’s done sweet things. And she’s a little mimic, so it caught on. Anyway, I liked stuffed animals when I was a kid because each one usually had a story. I even saved my first for Cate.

Well, Cate’s stuffed animals have stories, too. And these three are especially story-worthy.

A few weeks ago, Cate and I were at a yard sale that Friday morning when I ran into a friend of a friend who I’ve met a couple of times. Turns out she was one of the parts of the three-party yard sale. I bought a few books, and then as we were leaving she handed Cate a strange-colored bear and said she thought she needed it.

I don’t know about needed, but it definitely was a sweet gesture. And Cate really liked it. She played with it in the car the rest of that morning as we were going to some other yard sales. Since then, the bear has made his way into the house, so she pulls it out to play with frequently.

Then last week, we were at another yard sale on a Friday morning. (Hey, I like Friday morning yard sales. You get the first look at the merchandise. And it’s a good way to get out of the house with Cate on sunny mornings.) This time the yard sale was out in the county, which means it took me a little longer to find. I went specifically because the ad said she was selling scrapbooking stuff. I bought a few pieces of paper, some embellishments and a Xyron sticker maker that is bigger than the one I have been using. As I’m paying the lady, she asked if Cate wanted a bear or lamb to take with her.

I was thinking: Um, neither. But I told the lady it didn’t matter. She decided to let Cate pick.

And Cate picked this strange-looking lamb that still has a Christmas tag on it from the Salvation Army. It’s head is cocked to the side, and that throws the whole toy off.

Then there’s the stuffed ostrich. I mean, who else has a stuffed ostrich? OK, I admit. I called it a turkey when we brought it home and I showed Greg. Anyway, when we were at Katie’s shower last weekend, her Aunt Marsha brought the ostrich out for Cate to play with, and ended up sending us home with it.

The ostrich definitely wins the prize for the most unique among the free stuffed animals Cate has recently acquired for her collection.

Here’s another shot of Cate with her rescued friends … 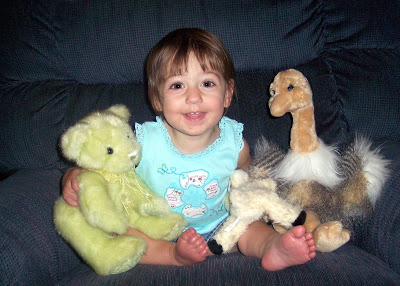 … I think she’s learning how to cheese!

And some close-ups of the animals themselves … 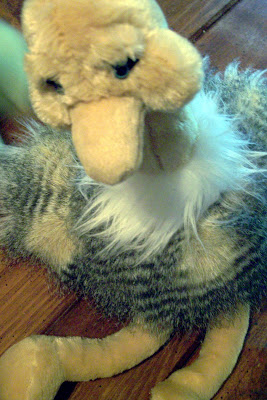 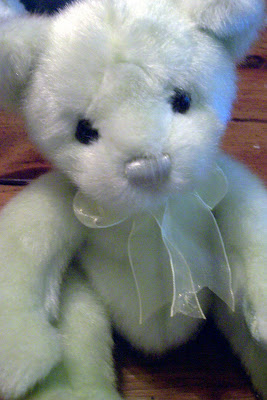 None of these pictures does the bear justice. It’s a strange light green color that looks yellow in some lights. Definitely not a Crayola color with which I’m familiar! 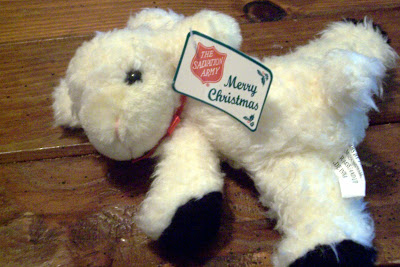 And one last group shot … 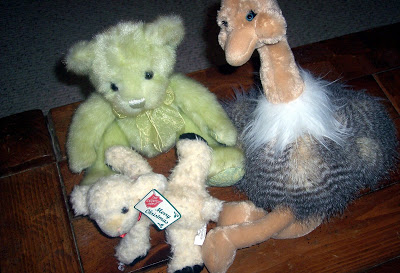 Fellow scrappers, does a title for the page I’m going to do soon come to mind? I keep thinking about salvaged, rescued, trash to treasure …