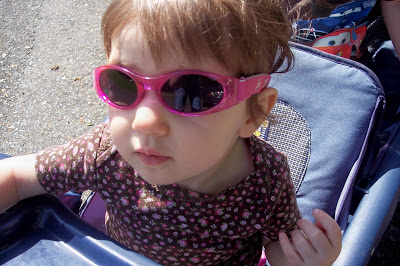 Today was the kind of day I’ve been waiting to have. Full of simple pleasures.

The day started with my dad arriving four hours earlier than I expected for lunch. Yes, he came from Indianapolis (where he works most of the school year) to Murray for lunch. Turns out he came into town last night instead of driving down this morning, so he called me at 7:41 a.m. to inform me he was running some errands then coming over. It was nice to spend the morning with him. And Cate apparently thought so, because, man, was she entertaining. We had lunch at Applebee’s and then he headed back to Indy.

So while at Applebee’s, Cate feel asleep, like head-falling-forward asleep, while Greg was holding her. She even drooled on his arm. It was sweet, and I had the feeling it meant I was in for a long nap time. Indeed. She transitioned from his lap into the car seat and then into her bed. And I didn’t hear from her for 2 1/2 hours. You other moms know that when the child goes from two naps to one, that one is greatly valued and is slightly unpredictable in the beginning.

You can see that I enjoyed her nap time.

So then we went on a walk with Jaclyn, Luke and Norah. The weather was perfect. I seriously could live in a place that is 75 degrees and sunny with a slight breeze 365 days a year. I decided it was a good day to get out the sunglasses that Mom sent Cate in her Easter basket, well, rather, over-sized box that arrived courtesy the U.S. Postal Service. I hoped I could keep them on her long enough for a picture. Turns out she likes the sunglasses, at least today she did. She left them on for the 2-mile car ride over to Jaclyn’s house and through most of our walk. (See photo above!) And when she took them off, she acted like she wanted them back on. After the walk, Cate used the infant swing that as of today is attached to Luke’s new swing set. 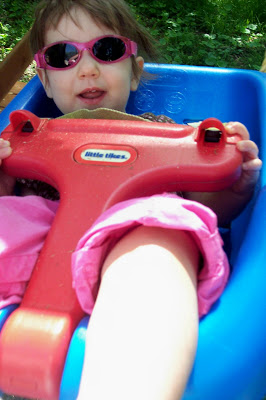 Apparently she needed her sunglasses some more.

So then, (yes, the day gets better …) I talked to Katie on the phone. I’ve really been missing her lately. I think it’s because she’s going to have a baby in August and I’m really excited for her and I know she wants to talk baby pretty much all the time and I’d love to talk baby with her pretty much all of the time. Anyway, talking is full of some of the most comfortable, familiar, entertaining moments I’ve ever known.

By this time it was nearly 5, and I decided I wasn’t cooking dinner because I knew we had small group at 6. Messing up the kitchen to cook a meal that we’d have to eat quickly might have ruined my day. So we went to Culver’s. It’s new in Murray. And I wanted French fries, for what I believe is the second, maybe third time, since February. Well, the French fries were OK, but the burger was quite tasty.

We made it to small group at our friends’ house about 6:05, and everyone else was running late too. We pretty just hung out and chatted about our lives while our children (combined there are five kids under 3 1/2; only one isn’t mobile) feed off each other’s hyper energy.

Now I’m getting ready to go scrapbook some more.