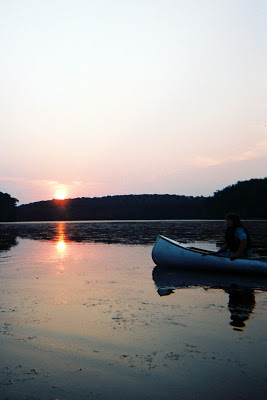 Greg’s brother John proposed a sunset canoe trip at Land Between the Lakes. Technically, we were on Honker Lake, which is a no-wake lake because it’s dammed off of Kentucky Lake. (Is that the right way to say that?) I admit that I was a tad nervous because the last time I remember canoing (Seriously, that’s how that’s spelled?) I was probably 10 years old and ended up outside the canoe in a part of Cumberland Lake that supposedly housed water moccasin snakes. (They’re poisonous, you know. Or so that’s what the camp guide guy said they were … maybe there’s weren’t, but he got me scared.) Anyway, I like going white water rafting, so I don’t know why I was nervous about a canoe.

It was really fun. 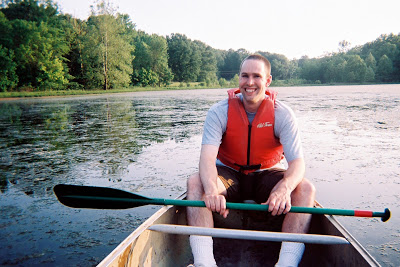 Greg steered the boat, and I was a vocal partner! I sometimes doubted his ability to get us where we were supposed to go, but he always got us there. His turns were just really wide. 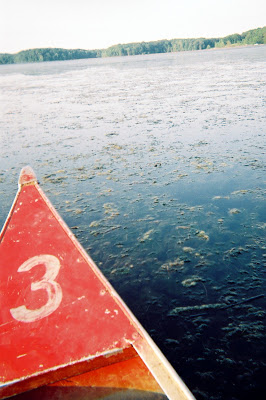 This is my view. Yes, much algae. I suppose that’s what happens in a no-wake lake. I mean, no current whatsoever. 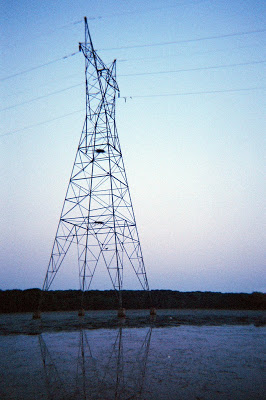 We learned about ospreys. They build big nests in trees and on unnatural structures like this. See, there are two there. Sometimes they start building two and decide which on they like better. My favorite part about them (and generally I don’t find much interesting about birds!) is that they often return to their mate after spending the winters separately in the south.

I should add here that we had two guides. There were eight canoes of people like us and then two guides in another canoe. The guided canoe trip was something Land Between the Lakes was offering as part of Memorial Day weekend. 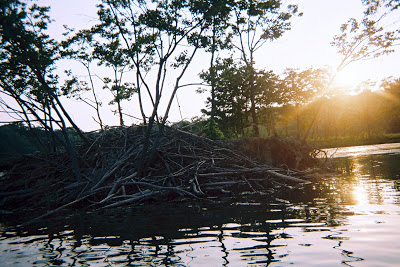 We also learned about beavers. This is a beaver lodge. 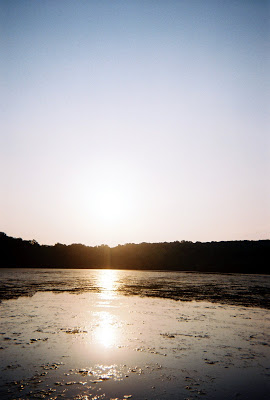 I became a tad obsessed with the sunset. 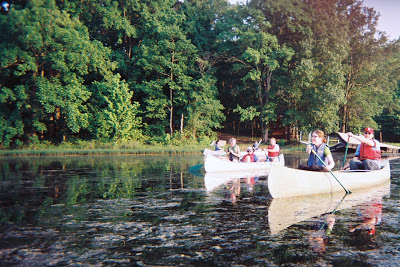 That’s Christine and John in the canoe in the forefront. The canoe trip was John’s idea — and a good one!

* The pictures aren’t as good as I would have liked, but, like I said earlier, I used a disposable camera I had because I didn’t want to risk my Kodak Easyshare ending up in the water. I told you, I was a tad nervous! I have to admit that I wasn’t all that comfortable with the old-fashioned disposable camera because I kept forgetting where the lens was, meaning my finger ended up in a few shots!