Yes, I realize this is a day late … 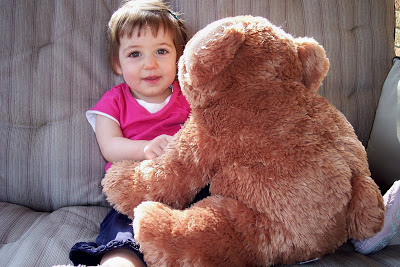 I’ve always enjoyed my daughter, but these last few months have been especially enjoyable. She’s always on the move, constantly exploring and noticing things, usually laughing or jabbering, and expressing herself more and more.

Just last week she had her first haircut. I didn’t think about taking pictures (I know, seriously, weird, huh?) because she was at the mercy of the scissors in my hand and we were home alone. I think I did alright. If you look at the pictures from the weekend or this one above, you’ll probably notice. I snipped her bangs and trimmed up the back. I think she could probably use some more bangs, but I don’t want to keep cutting. I did OK with what I cut, and I don’t want her to be one of those kids with terrible bangs — too short or uneven — because the mom couldn’t quit!

Don’t worry, I still plan on taking her to get a haircut, mostly to shape up the bangs professionally, in a couple months. And I’ll be sure to have my camera out!

Also in the past week or so, Cate has been crawling on her knees more. There’s still some Army crawling going on, but it’s more on her knees. You know, that reminds me, I need to get the video camera out for that.

And then there’s the pulling up. She’s been able to stand for awhile, but in recent weeks she’s figured out how to pull herself up on our legs, at the coffee table, and to the stand-up toys we have. Each day she gets quicker and less hesitant about coming up to this next level!

Her first birthday is pretty much planned. I got really excited about how her party is going to fall on Derby Day (and my birthday), so I started going with the theme. I even bought some of those classic Derby glasses for game prizes when I was in Louisville.

This has been the fastest year of my life. (You mothers who are ahead of me by a few years or even a generation: It only gets faster, doesn’t it?) And I catch myself thinking twice when people, often strangers, ask me how old Cate is. Twice today I said, “She’s almost a year. Eleven months, actually.”

Only one picture with the bear to go. Seriously hard to believe.

Meanwhile, I’ll leave you with a little story about just how much my life has changed: Cate and I were grocery shopping today. Have I mentioned she loves the grocery store? There’s lots to look at, and people are always talking to her. Anyway, when we’re grocery shopping, Cate often plays with my car keys. I just listen closely for the sound of keys hitting the floor. And if they do, she doesn’t play with them anymore. As I was turning the cart down the baking aisle today, I realized she wasn’t playing the keys and I hadn’t heard them drop.

I back-tracked, thinking they must be around the corner because I know she had them in the canned vegetable aisle when we were talking to a lady I used to work with at the newspaper. I started to panic when I didn’t see them laying on the ground. I doubled checked her seat in the cart. Still, I didn’t see my keys. I thought about how I’d really miss my car clicker/unlocker thing. That’s really convenient when I have my arms full, usually with my 11-month-old daughter. And I’d have to get a new Kroger card and start over with points toward gas discounts. Yes, these are the things that were running through my mind.

Then I remember Cate trying to get the plastic bag of broccoli that was barely out of her reach in the back of the cart. Maybe the keys fell in the back, I thought. But wouldn’t I have heard them? As I was moving stuff around in the cart, I did hear them. Turns out they were in the bag of broccoli. I guess she was closer to getting that plastic bag than I thought!