Katy and Chad came to visit us — and their old stompin’ ground of Murray — for a long weekend. We really enjoyed catching up with them and meeting their daughter Megan, who is three weeks and a day younger than Cate. 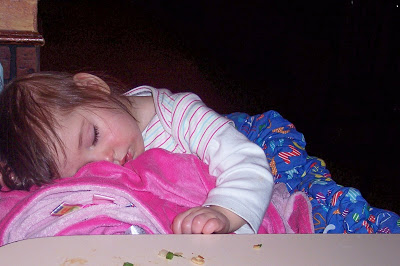 Yeah, what a good host Cate was! Seriously, though, she got another runny nose, although it only seemed to sporadically bother her. Thursday night she especially seemed to be lacking energy, as you can tell. Usually she’s all about eating, but she passed up her bites from some sleep in the restaurant. 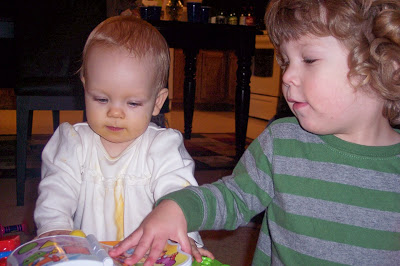 We had friends over Friday night for game night. Fulfilling his role as “Ladies Man,” Luke took a few minutes to play with Megan. 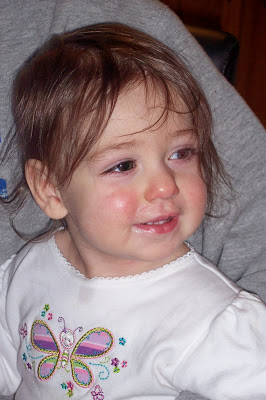 I just thought this was cute. She’s messy from having just finished eating and having a runny nose. Lovely combination, I know! But I like her smirk, and her little teeth that are showing. Speaking of teeth, she cut her sixth one last week and is working on at least one more. That’s four on the bottom and her two top “fangs.” 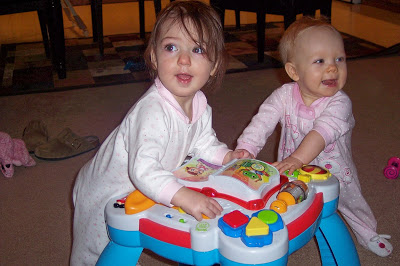 Cate and Megan really played pretty well together. Together meaning at the same time, in the same mess of toys, without really bothering one another. They did always seem to be most interested in the toy that the other had. This music table was a hit … 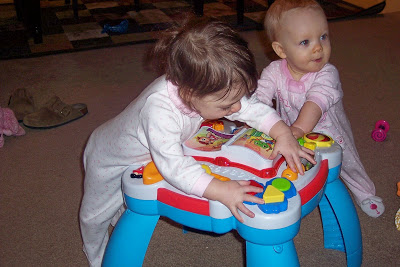 … although Cate tended to dominate. I guess it’s those three weeks she has on Megan! Seriously, though, it was neat to watch their personalities come out. Megan is a bit more reserved than Cate, who always has something to say and somewhere to be. 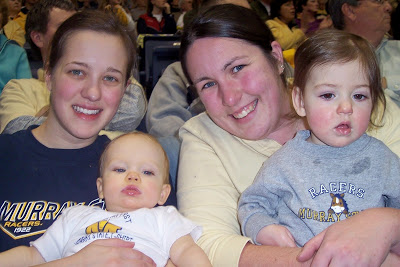 We took them to a Murray State game. It’s only appropriate that Megan be introduced to basketball in Kentucky, and we didn’t want to fail her! She seemed pretty content taking in the atmosphere. Katy’s picture from the game has a bit more action, with Cate enjoying the water bottle she had just taken from Megan, who obviously wants it back. 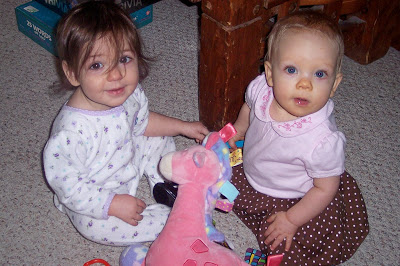 So Megan was ready for church and Cate wasn’t. But they’re still a cute pair! 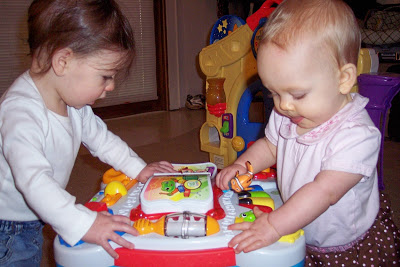 Back to the popular music table. I must say, though, both girls are pretty good at standing up. For Cate, it’s a rather new thing, like in the last week. (Side note: She also learned how to sit up from laying down rather well — and consistently — last week. And, let me tell you, every day she’s finding herself in more places more quickly!) Megan even worked on holding something in her hand, in this picture a Nemo Pez dispenser, while she stood! 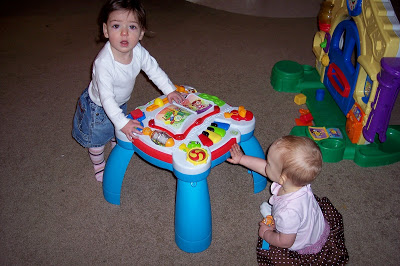 As you can see, Cate did eventually get dressed for church. Cute tights, huh?