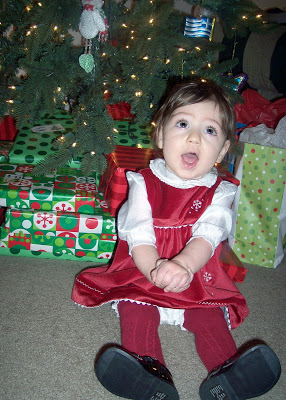 Today was a busy day. And it was a day that I started grumpy because I didn’t want to go to a college graduation in the rain with a 7-month-old baby. Well, I ended up going. And, although it took awhile, I got in a better.

This little face helped. Grandma did a good job picking out the dress, huh? It’s the same one she’s wearing when she met Santa, but I wanted some more shots of the dress. In this one, I particularly like her sweet hands clasped and how she appears to be singing.

After graduation, which, by the way, was for Greg’s youngest brother John, who recently finished his master’s degree, we went to lunch to celebrate. And Cate needed a nap … 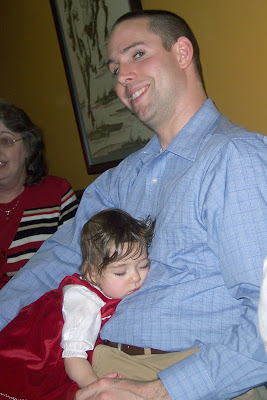 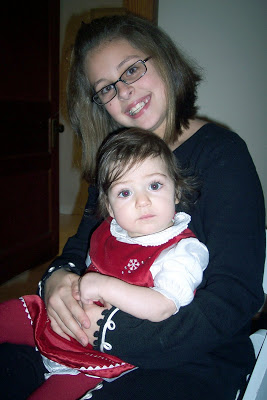 Seriously, though, to have Greg’s grandpa and his two brothers, all their children, all their children, and now their children mostly living in the same town is really neat. I appreciate it more and more all of the time. Tonight Greg’s Great Uncle Dan read a letter his son — who was adopted at 15 weeks old — wrote to him about appreciating the family values passed down from one generation to the next, I got teary-eyed because I’m thankful we chose to bring Cate into this family (along with my relatives) and that she’ll get to experience an extended family that just isn’t common today. 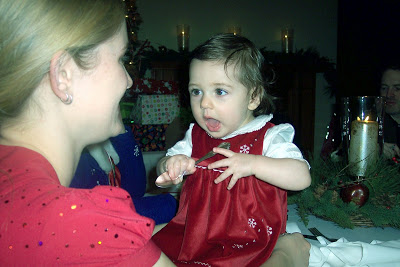 And here she is with her Aunt Angela. Apparently Cate had much to say about the spoon that was frequently in her mouth. Then on the floor. Then we got a new spoon. Good thing we really didn’t need the spoons for dinner!

Today’s party also included Cate’s first-ever Christmas present. She was briefly interested in the wrapping … then the present held her attention quite well, even before it was out of the box. 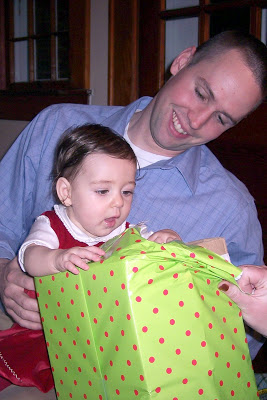 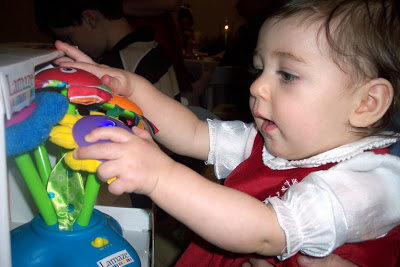