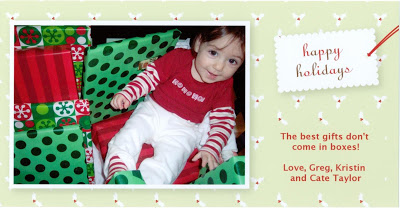 This letter accompanies the picture …

This Christmas story starts at last Christmas. We were in Louisville, visiting Kristin’s family, when her sister Cassie and her fiance Zac told us they found a baby for us to adopt. By the time we returned to Murray from Louisville, we had decided to pursue this specific adoption.

A couple of telephone conversations led us to Bloomington, Indiana, on January 18th to meet the birthmother in person and meet our baby girl via an ultrasound. And we named her on the way home. Catherine Anna. Catherine after Kristin’s mom and Anna after Greg’s grandma.

After seven trips to Bloomington, many phone calls and e-mails to our social worker and attorneys and a stack of paperwork, our daughter was born May 6 — just 15 ½ weeks after we first saw her on the monitor in the doctor’s office.

We left the hospital with Cate the following day, spent a week in a hotel in southern Indiana waiting for people in Indianapolis and Frankfort to clear the necessary paperwork, and haven’t been the same since.

Kristin returned to work six weeks after Cate was born. But that lasted only three months. Since September, she’s been enjoying the opportunity to be a stay-at-home mom to Cate.

But speaking of work, Greg loves his endeavors as a real estate investor/house flipper/real estate and small business attorney. He’s in a new office with good visibility. In addition to rental property, renovated houses and foreclosure-rescued homes, Greg also started a realty company, so the realtor sells and manages his properties as well as other people’s properties.

We love the flexible schedule that allows us to spend time with our families and be involved at our church and in the community. Kristin keeps the books for Greg’s companies and takes Cate along with her a couple times a week.

Milla — our nearly 4-year-old niece on Kristin’s side of the family — is particularly fond of Cate. Milla has called Cate her “best cousin.” Then on the Taylor side, there’s Elijah, who’s also almost 4, and Ethne, who turned 2 in September. We’re glad to have Elijah and Ethne (along with their parents!) back in Murray after Greg’s brother Charles graduated from University of Tennessee’s vet school in May.

The same weekend in August that we celebrated our fifth wedding anniversary, Cassie and Zac were married. Being five years apart in age, the Hill girls appreciated the similar timing of their marriages starting a year after being out of college.

Cassie and Zac met at Austin Peay State University, where she played soccer and he played basketball. Despite their alma mater being a heated rival of Murray State, we’re thankful to have Zac in our family now.

We’ve taken Cate to a St. Louis Cardinals baseball game as well as Murray State football and basketball games. The University of Kentucky wanted to make us buy a ticket for her, so we’ll wait until she can appreciate the Big Blue to take her to Commonwealth Stadium.

A growing family — both immediate and extended — has been the theme, and we couldn’t imagine a better story to tell. We’re thankful to have family and friends like you with whom to share our life.

May God bless you and your family and give you good stories to tell in the coming year.