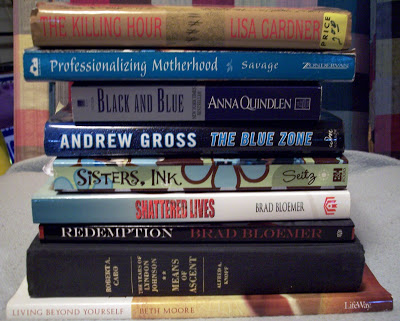 This is the pile of books that I’m thinking about reading. Well, I’ve actually started “Professionalizing Motherhood.” It’s a good choice for me. This is my ninth weekday home with Cate and I’ve only dealt with the self-applied pressure of thinking I’m not doing enough around the house one day. And that same day I did like three loads of laundry while Cate was napping.

OK, so this is probably the place I should admit I’ve watched the whole third season of “Grey’s Anatomy” over the past week and a half in preparation for last night’s series premiere of “Private Private” practice and tonight’s season opener of “Grey’s.” So I’m a little addicted.

And, for the record, I give Addison’s new show a thumbs up, mostly. I wasn’t wild about the psychiatric storyline last night with the woman counting the tiles in the store after she was reminded of her son who died from brain cancer. It just seemed sort of out of place with the rest of the show, but it wasn’t enough to make me turn it off. And I’ll record it again next week.

Cate and I are in a good routine. And it’s been a nice mixture of being at the house and getting errands and other tasks down outside the house. Today we even went to the park with Angela, Charles, Elijah and Ethne. Greg met us up there for lunch and brought Quizno’s.

I find myself talking more about poop, the deals I found at Target last weekend on Pampers Swaddlers and Similac formula, how Cate slept the night before and the chores I found time to complete. But, you know, I don’t really miss talking about the drug busts, crazy phone calls with so-called news tips and whatever meeting is on my agenda for the day. I loved that stuff when I was doing it, but I love taking care of Cate even more.

You know, she makes the best faces when she’s eating and just after she’s woken up from a nap. She’s giggling more and even likes the silly songs I make up. My little Cate, she’s a wiggle worm … is a popular song I sing when I manage to put her diaper on while she’s kicking on the changing table. Kicking out of pure happiness, I should add. It’s her new thing, along with giggling.

Gradually, I’ll make it through those books. And I’m in the mood to scrap some too, so hopefully I’ll have the time to be inspired. But more than anything you should know that I like it at home with Cate. 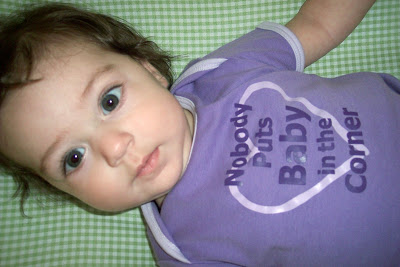 So the cute onesie Cate is wearing today is courtesy my mom, who along with my sister and myself, can pretty much quote all of “Dirty Dancing.” We’d probably all agree that the last scene when Patrick Swayze brings Jennifer Grey up on stage to dance to “I’ve Had The Time of My Life” is the best part of the whole move.

But just before that scene … Johnny bravely tells Baby’s parents: “Nobody puts Baby in a corner.”