This weekend included …
1 morning of sleeping in
1 bridal shower
2 games of Seafarers of Catan
1 birthday party
1 baby shower
2 Cardinal victories (and 2 Cub loses)
505.6 miles in the car in a 13-hour trip to and from Louisville in 1 day

The weekend got off to a good start with a few extra hours of sleep for me. Then Saturday was the bridal shower, Seafarers (Hey, we could have played more if we had more time …) and birthday party. Then Jaclyn, Cate and I loaded in the car Sunday morning for a day trip to Louisville for Kelly’s baby shower. She’s expecting Amilia on/about Sept. 7. Then she’s back to Mexico to be with her husband Carlos. (Long story …) 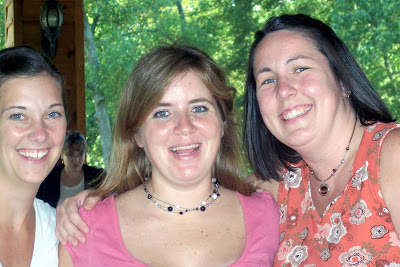 But at least Jaclyn mostly made it in the picture. Obviously, we didn’t take this. But, hey, it’s the souvenir from the day. That the after-taste of the pasta baby food I had to taste as a tie breaker for a game. I did win, though.

The thing that sucks about day trips to Louisville is the lack of time with my family. I got to see Mom, Kevin and Milla for about an hour at Chili’s. (And Mom showed off the new Costco. (Totally seemed like Sam’s to me, but I still appreciated the huge cans of formula for just a few dollars more. Gotta love bulk of something that is used multiple times a day!)

And, just because I know you’re wondering, this is popular look for Cate these days … 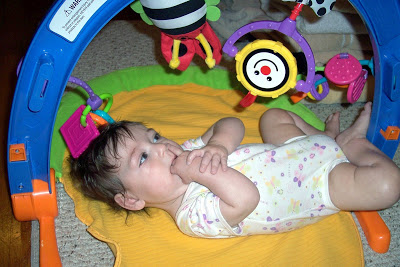 Turned the opposite way from how we lay her down beneath her towns. Feet propped up on toy. Fingers in mouth.