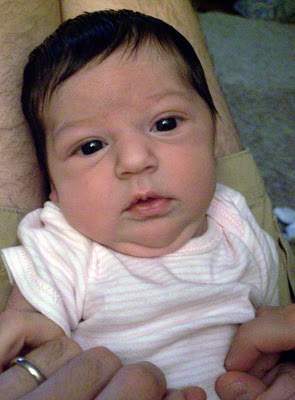 Cate has been keeping her eyes open more the last couple of days. She’s more alert while eating and then for some time afterward.

Some of this alertness came while we were watching finale-filled Thursday night television. Hooray for Jim leaving Karen in New York and asking Pam out on a date.

Then Grey’s didn’t disappoint either … Surely Meredith is just having her usual doubts about life and not really Derek. His speech there toward the end about her being the love of his life was emotional. Izzie’s speech to George didn’t inspire me as much. Burke’s vows were beautiful, but he has a point about trying so hard to help Cristina be someone she isn’t. And Alex … man, he breaks my heart sometimes. I wanted to learn more about him this season. Perhaps there’s more to come on him in Season 4. And Callie is chief resident? Hmm … And chief is still chief, even though his wife realized she may have slightly misunderstood him recently. I figured one of the interns would fail their test. Man, George is left to much soul-searching while Izzie sat in the church perhaps trying to let go of her love for him. And we all know Addison is off to her spin-off show.

And then there was CSI. The miniature killer was revealed at the beginning of the episode but the story still wasn’t tied together. Those writers really had the nerve to end with a “To be continued …” line on the screen. I mean, sure, season finales are often cliff hangers but to leave enough open that “To be continued …” comes on the screen. Man …

So, while I was flipping through channels at 5 this morning while feeding Cate, I noticed something strange: MTV was playing music videos. It was some rap song that I’ve never heard of and didn’t care to know, but I was impressed with the fact MTV returned — at least momentarily — to its roots and away from reality television. Then I noticed on the TV Guide channel that MTV and VH-1 were playing music videos for at least a couple hours.