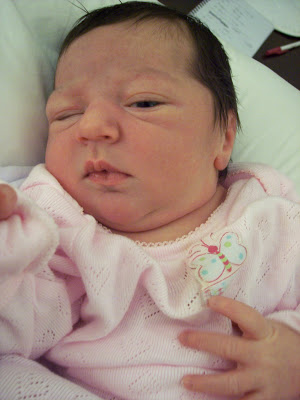 The following is a scenario I suspect will be played again. The characters this time are Olive Garden Waitress, Baby Cate, New Mama, New Papa, Grandpa and Grandma.

Cate is sleeping in the carrier at the end of the booth near a high-traffic area. She assembled quite a fan club in a matter of minutes.

Olive Garden Waitress: Oh, she’s so cute. How old is she?

New Mama just nods and smiles, thinking there is no need to clarify the situation.

OG Waitress: Noticing the head full of dark hair. Did you have a lot of heartburn?

New Mama: Well, actually, we’re in the process of adopting her.

OG Waitress: Oh, well, I think she looks like you.

OG Waitress: Looks at New Papa. Actually, she looks like both of you.

Grandpa: Points at Greg. Does he look like me?

OG Waitress: No. He looks like her. Points to Grandma.

Then as they’re leaving …

OG Waitress: She’s really beautiful. And I still think she looks like you all.

OG Waitress: Looks at Grandpa. So your son is really adopted too?

Grandpa: Giggles. Oh, no. I was just asking.