I shredded lots of old bills and receipts while making an effort to organize the filing cabinet of personal documents, accounts, insurance, etc. I shredded so many things that I had to dump out the shredder three times. A large black trash is mostly occupied now with small fragments of so-called important papers.

Pam likes to shred things at Dunder-Mifflin. She even showed a colleague’s son the joy of shredding in one episode. 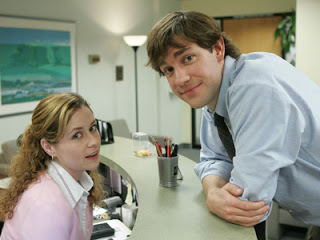 For the record, I would like to state that I’m on the Pam side of the Jim-Pam-Karen love triangle.

Sure, you could say Pam had her chance but opted for Roy. With Roy (hopefully) fully out of the picture, Pam is obviously thinking about Jim, and the friendship they formed that could have been more. Meanwhile, Jim is doing is best to get over Pam while dating Karen. I have nothing against Karen. She’s pretty, sometimes funny and usually focused (on both her work and Jim). But she’s not Pam. I think I can relate to Pam more (beyond the shredding!) because she’s slightly awkward and tries to be nice in a office that doesn’t always prompt such a thing.

And, thing is, Karen knows. She knows what I know: Pam and Jim have a connection. She knows Jim is good for Pam and Pam is good for Jim. Yes, they pull off pranks together, but that’s only the tangible effects of their connection. Now, maybe, just maybe, Pam is ready to confront these feelings of hers.

Go, Pam. Even Roy expects you to!

And shred some documents if you need some time to think.