… My car gets me along just fine to and from the station
But my castle is this Houston Metro Bus
My first stop is Ashbury.
And the sign’s been gone for years
but all the same the people wait cause they know that I’ll be there.

Well, I’m always there by five fifteen
and lately I’ve been early
’cause Judith likes to be in early to the bank.
And she gives me conversation and a token good for riding.
And she’s happy all alone

And then there’s Charles in retail sales;
and I hope they pay him well
for the work that young man does
Cause I’ve never seen the inside
of a custom refrigerator
but I know he’s the first and last one there

I wonder what they do all day,
and their respective works. …

And I wonder how this world would be
if I was never here to drive this bus around from Ashbury to Main.
Suppose this town would be the same
but with one bus’ less exhaust.
But that bank and retail stores,
they just wouldn’t be the same.

Can I really prepare to leave my work for someone else to pick up when Catherine Anna arrives? I have been keeping a list of all the “news” I already know about. Thing about news is it just happens sometimes. But I think the real question is: Does it matter that I’m going to be gone for six weeks? I like my job. I like knowing what’s going on and communicating that to other people interested in knowing what’s going on. But the news isn’t going to stop because we have a baby.

I’ve come to the point of realizing (at least starting to realize) that other people’s stories aren’t my priority. Yes, I like gathering the information and writing it for others to read. Yes, I like covering meetings and events and relaying those on to others. But going to my baby’s doctor’s appointment on Friday was without a doubt more important than covering the MSU Board of Regents meeting. Seriously.

And that’s how I want it to be.

I want to work hard and do a good (maybe a better word is fair) job while I’m there and when I’m available. But more importantly, I want to be a good mother and the best person I can be for my family.

So Greg and I spent about nine hours in the car yesterday. To Bloomington. Doctor’s appointment. Lunch with the birth mother. Back toward Murray. Stop in Evansville to shop at Target. Home 14 hours later.

And let me tell you, what a great day, to say the least.

In nine hours I could make it to a beach, or at least really, really close. I like the beach, you know. But nothing compares to the process. I’m to the point that I’m as ready as I’ll ever be. People tell me I’ll never be ready. But I’m telling you I’m ready to learn that I’m not really ready.

On that note, sort of, I really liked this Elisabeth Eliot quote Laura used on her blog earlier this week.

We like things to go smoothly and as planned. Very often unexpected things intervene, and our plans go awry. We think we’ve got “problems.” There is another level at which everything that happens is being engineered. “God has no problems,” Corrie ten Boom said, “only plans.” When ours are interrupted, his are not. His plans are proceeding exactly as scheduled, moving us always (including those minutes or hours or years which seem most useless or wasted or unendurable) “toward the goal of true maturity” (Rom 12:2 JBP). Believe God. Turn the interruptions over to Him. He is at the controls. 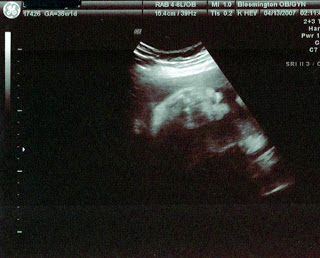 So, see, God is ready. And the process is part of the plan. Thankfully, we really haven’t encountered anything we perceive as a “problem.” But this process is obviously loaded with the unexpected. I pray I continue to rejoice in God’s surprises. But for the record, even her foot is cute …
(That’s her big toe and two others that you can see pointing to the right. The other two are there, just not as clear. I tell you, these ultrasounds are amazing.) 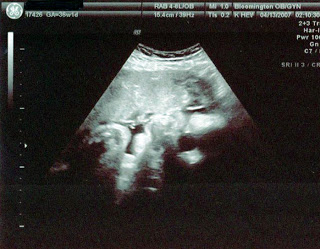 She’s 6 pounds 12 ounces right now with four weeks until her due date. And she has hair. (That’s a profile shot from the ultrasound clouded by the placenta. The top of her head is toward the right of the photo, and then her chin is sort of in the middle.) She’s already positioned like she’s ready — head down, feet in birth mother’s ribs. And, according to my online research, her skin is likely “baby soft,” her fat is probably dimpling her elbows and knees and hopefully her kidneys are fully developed and her liver is processing.

She’s a little person. And we are so ready for her to be part of our family.